Hans Smit, "a modern day Faberge" (Gourmet Magazine 1981), was born in Holland and has lived and worked in Antigua since 1965. He used to work on commissioned pieces only, out of his house in English Harbour, but decided to move his studio to the newly restored Redcliffe Quay on the waterfront in St. John's in 1981. Here is where his jewelry can now be seen (and bought) at The Goldsmitty. 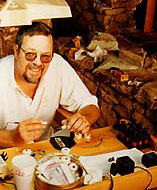 Organic forms are used in combination with designs sculpted first in wax and later cast in 14 or 18 karat gold. A selection of gemstones (Imperial Topaz, Black Opal, Bicolour Tourmaline, and Tanzanite, to mention a few) and pearls (including the Tahitian Black), for one-of-a-kind pieces, is available as well as limited edition jewelry. All the work is done on the premises and his customers now include people from all over the world. - "I think a jewel is primarily a piece of functional sculpture that enhances the beauty of a person, be it physical or spiritual. It should not pretend to be more than the person who wears it. It should however be worn and looked after with love and care, like I designed it." - Hans Smit

We are currently members of:

The Diamonds we use are most of the time SI1 (Slightly Included) or better. This means that there is an inclusion that can only be seen under 10X loupe. The colour of these stones normally ranges between F and H (fine white) and the cutting is excellent. In fact all our melee is made either in Russia or in Belgium. Both countries cut for maximum brilliance instead of weight. Birthstone for April.

Sapphires are found all over the world with some of the finest coming from Sri Lanka, Kashmir, and lately Madagascar. Although Sapphire is justly famous as a blue stone, it naturally occurs in every colour except red. When it is red it is called Ruby! Ruby and Sapphire are actually the same stone (corundum). We have beautiful colour charge Sapphires as well as magnificent Star Sapphires from a new mine in Madagascar. Birthstone for September.

Our Emeralds are either from Colombia or Brazil. They range in colour from a lively medium grassy green (Colombian) to a more full-bodied, darker, saturated green (Brazilian). All Emeralds have inclusions and are treated in various ways to improve their overall appearance. Birthstone for May.

Ruby is the red variety of corundum with all the other colours being called Sapphire. The best Rubies were traditionally (and still are) found in Myanmar (formerly Burma). Although some fine Rubies have come out of east Africa (Kenya and Tanzania) and Thailand. Most Rubies are heat-treated to permanently improve their colour. Birthstone for July.

Modern technology has made it possible for many of us to enjoy the beauty of Blue Topaz. Topaz sometimes occurs naturally in very large colourless crystals but rarely in blue. However it was discovered that the desired blue colour could be achieved in the laboratory by radiation and heat-treatment. The different shades of blue are know as Sky, Electra, Swiss or London Blue with the latter having the most colour saturation. Birthstone for November.

The royal purple variety of quartz, according to legend it protects against drunkenness. It has an outstanding place in history as the gem of royalty and religious leaders. The most beautiful stones have red flashes as a secondary colour. Best gems come from Russia, Brazil (large geodes), Uruguay and Zambia. Birthstone for February.

Citrine is the somewhat neglected sister of Amethyst. It is a lovely form of quartz which comes in many different hues ranging from deep orange to a honey yellow and unfortunately is labeled under many different names such as Bahia Topaz, Irai Topaz, Rio Grande Topaz, all of which have nothing to do with Topaz. A well proportioned and properly cut Citrine Glows like a speck of sunlight. Birthstone for November.

Peridot is the only extraterrestrial gem! Crystals of Peridot (gemolivine) have been found in meteorites, thus proving it is not just our planet that produces beautiful gems. On Zabargad Island in the Red Sea the finest Peridot has been mined off and on for over 3500 years. Other important sources are the San Carlos Reservation in Arizona and Burma. A wonderful present for someone born in August.

Zircon is not a common stone and Blue Zircon is sometimes hard to find. However, we have met at the Tucson Gem Show a dealer who specializes in this lovely sea-blue-green gemstone so we certainly have a nice supply on hand. Birthstone for December.

There are at least twenty different members of the Garnet family: pyrope (grandma's beads), almandine (red brown), hessonite (golden brown), rhodolite (lilac to rose red), spessartine (bright yellow orange) and tsavorite (as green and clean as the] best emerald) to name a few. Prices differ as much as the colours with tsavorite and spessartine being probably the highest. All beautiful gemstones in their own right and found all over the world. Birthstone for January.

A favorite among favorites! The Czar's gem, originally discovered a hundred years ago in the Ural Mountains of Russia, the very rare Imperial Topaz was so coveted that it was strictly reserved for the Czar and his family. That location, however, has long been exhausted. We had the privilege of being invited to the only working Imperial Topaz mine in the world: the Capao Mine near Ouro Preto, Brazil. This beautiful gemstone ranges in colour from golden to peach to salmon with sherry reds, pink and purples as the most sought after shades. A collectors item, it is the birthstone for November.

Tourmaline, ah tourmaline! Namibian blue green, Brazilian bicolour, Maine mints, Nigerian pinks, Madagascar liddicoatite (watermelon), we have it all and a lot more. A stone, which is finally beginning to be recognized for what it always was; a beautiful underrated gem with more colours than a black eye and most of the time at least two or three shades in the same stone! With Opal, birthstone for October.

Most people think of Opal as a milky white stone with a few flecks of colour. You have not seen anything yet! A collection of Opals is like a fireworks display. There are broadflash, pinfire, harlequin, black, boulder and crystal Opals to name a few and every one has a unique play of colour. The blue-green and gold combinations are often favorites because of their resemblance to a Caribbean sunset. If you are born in October, remember that we have been collecting Australian Opals for 20 years.

The mystery stone, Ruby by night and Emerald by day! Originally only mined in Russia and named for Czar Alexander, this extremely rare variety of Chrysoberyl is now only found in Brazil and Tanzania. In incandescent or candlelight, Alexandrite will appear red due to the predominance of red wavelengths in this light. In fluorescent or daylight, it will look green because fluorescent light is rich in blue- green wavelengths. Synthetic Alexandrite (actually synthetic corundum with a colour change) has been around in fairly large stones since the 1920s. and is an inexpensive substitute for the real thing (ours!) Together with Pearl and Moonstone, it is the birthstone for June.

Aquamarine in its natural crystal form often has green as a secondary colour. This is not always deemed to be desirable so most of these stones are heat-treated to drive out the greenish tinge. Our Aquamarines, however, are Nigerian gems and they do not need any treatment. They are beautifully cut to our own specifications and, since we buy this cutter's total output, we have a very large selection. Birthstone for March.

Tanzanite, which was not discovered until 1967, has rapidly become many people's favorite with its unique blue purple colour combination. It is only found in the Merelani district in Tanzania and since our supplier spends most of his time over there we have an excellent selection ranging from 10-carat stones to lovely 1-caraters that are specially cut for us. There are quite a few dealers who would like to make Tanzanite the official birthstone for December since no one seems to be very much in love with Blue Zircon.